Wine Tasting Limousine Tours From Sanfrancisco
Are you searching wine tasting limousine tours from Sanfrancisco ? –
Limo Service Sanfrancisco providing daily tours to Napa Valley, Sonoma, Lodi and Amador Wine Country which is home to an abundance of wineries throughout the region. The perfect climate for producing award-winning premium wines.
There’s a reason Napa Valley, Sonoma, Lodi or Placer County wine region produces some of the world’s best wines. Full-bodied Cabernets, fruity Zinfandels, Merlots, and buttery Chardonnays are just a few of the dozens of varieties presented by the 1000-plus wineries that pepper these fertile soils. A tasting is never too far away in Northern California, so grab a glass, and get started.
Ready for the Ultimate Wine Tasting Excursion?
Napa Valley Calistoga or Sonoma California wine country combines diverse soils with warm days and cool nights for an ideal growing condition to produce more than 70 wine varietals. The different wines produced at Napa-Sonoma wine country vineyards range from Cabernet Sauvignon and Merlot to Syrah, Viognier, and Roussanne, to the area’s heritage wine, Zinfandel. vineyards produce wines that are characteristically rich and well-developed, due to the long and consistent growing seasons of the California Northern Coast. With cool nights, warm days and late rains, Lodi and Placerville vineyards tend to have a longer growing season compared to other wine regions. This unique growing season helps to develop fully mature fruit whose acid chemistry maintains balance during the cool nights.
Let Limo Service Sanfrancisco whisk you away on one of our amazing wine tasting limo tours. We have in-depth knowledge of the many local wine tasting regions on the Northern coast of California, and we often bring passengers to our favorite wineries to Opus One, Caymus, Robert Mondavi, Mumm Napa, Frogs Leap, Joseph Phelps Vineyards or ZD Winery in the Silverado Trail.
The Silverado Trail is a scenic route that travels 29 miles along the Eastern edge of the Napa Valley, parallel to and several miles to the east of California State Route 29. Seeing is believing. Let’s Go On A Wine Tour Today! Click here to fill out a form with your wine tour limousine needs!
For any questions or concerns please contact us 916 221 0462 or explore our website to see just how much we can do for you!!

A closer look at 27 wineries damaged by Wine Country fires 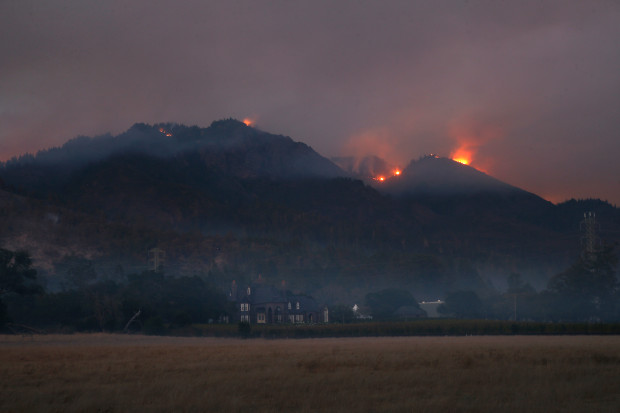 Here’s a closer look at the wineries and vineyards that were damaged or destroyed by the fires that bring the list of fire-damaged properties to 23 in Napa.

Ahh Winery: The winery building at Glen Ellen was completely destroyed, along wth its water system, reports owner Bruce Rector. “We are OK,” he says. “The good news is we have two years of inventory.” The boutique winery offers a large selection of pinot noir, and the Rectors are known as much for their organic food as for their wines.

Ancient Oak Cellars: The home vineyard at Siebert Ranch, in the Russian River Valley, experienced significant loss because of fire. “I’m very sad to report that our house, two big beautiful redwood barns, gorgeous tasting counter, etc, etc are gone,” the winery wrote on Facebook. The bottled wines and wines in barrel, however, were safe at other locations and the owners said Wednesday they believe the vines were spared. The Siebert Ranch vineyards grow grapes for the pinot noir; the Zinfandel, cab sauvignon, merlot and cab franc are grown on other estates.

Backbone Vineyard & Winery: Sattie Clark said the small family winery in Redwood Valley burned to the ground in the Redwood fire, “along with all our wine made over the past five years.” Backbone specializes in Bordeaux varietals from its steeply terraced vineyard.

Darioush: The Persian temple-inspired building housing the winery and tasting room was untouched, but landscaping and vineyards sustained some fire damage. Proprietor Darioush Khaeledi built one of the largest family-owned grocery businesses in Southern California before founding the Napa winery in 1997. The grand winery was inspired by the wine culture in the Shiraz region of Iran. Darioush wines, including Shiraz and red wine blends, have gained critical acclaim since the first release.

Domaine Carneros: The a sparkling wine house in Napa’s Carneros district escaped damage to its winery, the vineyard manager confirmed, but a one-acre estate vineyard burned. The vineyard was in Sonoma, on the Stornetta Dairy property, which also burned down.

Frey Vineyards: The country’s first organic and biodynamic winery lost its Redwood Valley winery and bottling facility but a wine-storage warehouse is still standing, along with the wine tanks, a majority of the crush pad and all but 10 percent of the estate vineyard. Frey also broke ground two months ago on a new winery site on West Road in Redwood Valley and that was untouched by the fire. Their wines include cabernet sauvignon, chardonnay, merlot and white zinfandel.

Hagafen Cellars: Napa Valley’s first kosher winery sustained fire damage to the back of its winery building, outdoor tanks, and crashpad, according to owner Ernie Weir. The winery has produced gold medal-winning chardonnays, cabernet francs, and pinot noirs. Since its first release in 1980, Hagafen Cellars wines also have been served several times at the White House.

Helena View Johnston Vineyards: Owner Charles Johnston said everything was “annihilated” at his organic winery off Highway 128 in Calistoga, where for 26 years he has grown cabernet sauvignon and cabernet franc vines. His winery is known for its limited production complex Bordeaux style reds produced entirely from Napa Valley grapes.

Jarivs Estate: The Napa winery from the Atlas Peak district sustained significant damage. Several structures, including the estate’s historic barn, known as Jarvis’ “pilot winery,” were destroyed, according to brand manager Elizabeth Rhoda. The winery is safe, however, thanks to being housed in a 45,000 square foot cave dug into the Vaca Mountains.

Korbin Kameron: According to the Glen Ellen winery’s Facebook page, some outbuildings were lost and part of the vineyard was damaged, although no word yet on how much of the vineyard is gone. The family home on the property also burned down. The winery is named for owner Mitchell Ming’s twin daughters. Perched high above Sonoma Valley on Mt. Veeder, the 186-acre property produces rich cabernet sauvignon, cabernet franc and petit Verdot from the all-star team of viticulturist Phil Cotturi and winemaker Timothy Milos.

Mayacamas Vineyards: The winery atop Mount Veeder in Napa survived the fire, but a private tasting and events building is known as “the residence” was destroyed. That private tasting room was the only space where tastings were held. The winery has existed since 1889 and is known for its cabernet sauvignon and merlot wines.

Nicholson Ranch Winery: While fires burned around this Sonoma County winery, the estate vineyards, winery, and tasting room escaped intact, according to posts on Nicholson Ranch’s Facebook page. However, there is fire damage to the property surrounding the buildings. Nicholson Ranch is situated in the Carneros district, halfway between Napa and Sonoma Valleys. The winery is best known for Chardonnay and pinot noir, made with sustainably-grown grapes from the 40-acre estate vineyards.

Paradise Ridge Winery: The Santa Rosa winery was completely destroyed by the Tubbs Fire. The Byck family said on their website that they will rebuild the winery that was a popular wedding venue. “The winery may be broken but our estate vineyards survived, which is the foundation of our wine.” The winery lost its Russian River Valley tasting room, but still, has its tasting room and herb garden on its Kenwood property. Among its popular wines are chardonnay, zinfandel, cabernet sauvignon and a sparkling blanc.

Paras Vineyard: The Napa winery’s main building was destroyed by fire. While Paras no longer produces its own brand of wine, it does provide grapes to other wineries in the region.

Patland Estate Vineyards: The estate and vineyards off Soda Canyon Road in Napa were destroyed by the Atlas fire, according to winemaker Jay Buoncristiani. The winery specializes in red wines produced from grapes from the nearby Stagecoach Vineyard, which is still being assessed for damage, and their estate vineyard. The Patland Estate was well known for its Italian aesthetics.

Pulido-Walker’s Estate Vineyard: The Estate Vineyard of Mark Pulido and Donna Walker in Napa was destroyed, according to Christi Wilson, executive director of The Rancho Santa Fe Foundation. The owners confirmed that they lost their home and a portion of the estate vineyard during the Patrick Road Fire and that likely will impact their planned 2018 inaugural harvest from that vineyard. The Napa vineyard is one of three operated by Pulido-Walker and produces cabernet sauvignon and chardonnay. The estate property also features an extensive kitchen and ornamental gardens, as well as an olive grove from which they produce olive oil.

Roy Estate: The winery off Soda Canyon Road in Napa reportedly was extensively damaged by the Atlas fire. Roy is best known for its cabernet sauvignon and a proprietary red blend. The grapes are grown on a 17-acre estate just below the Stags Leap District.

Segassia Vineyard: A company spokesperson confirmed that the Napa winery owned by the Cates family has burned. Segassia’s cabernets regularly scored 93 points or higher by Wine Enthusiast. The mountain vineyards date to 1864.

Signorello Estate Vineyards: The winery and residence in the Stag’s Leap District of Napa were destroyed, but proprietor Ray Signorello says he will rebuild. The winery featured an impressive wine tasting and food pairing experiences. Their wines include cabernet sauvignon, Syrah, and Chardonnay, including a Cuvee chardonnay that scored 98 points by Wine Advocate.

Sill Family Vineyards: Owner Igor Sill said his Napa winery in the Atlas Peak district is a “total and complete loss. Amazingly the vineyards are untouched.” The winery did not offer public tastings but was still highly regarded for its cabernet sauvignon, chardonnay and rose.

Sky Vineyards: The owner’s home and vineyards in Napa’s Mt. Veeder district burned but the winery is still standing. The 14-acre vineyard sits at an elevation of 2,100 feet and features Zinfandel and Syrah vines. The winery has been farmed organically for a decade.

Stags’ Leap Winery: The historic stone Manor House, winery, and cellar are all intact, but several outbuildings on the property burned to the ground. The winery was founded in the 1880’s with the planting of vineyards; the iconic Manor House was built in 1890. The first vintage came in 1893, the same year the wine caves were built. Stags’ Leap is known for powerful cabernet and petite Sirah wines.

Storybook Mountain Vineyards: The historic winery in Calistoga is safe, but a separate building holding library wines — bottles going back several vintages and more — was lost. Ironically, the 1964 Hanley fire burned the 100-acre property that Jerry and Sigrid Seps bought in 1973 and turned into one of the valley’s premiere wineries for Zinfandel and Bordeaux red blends. Seps notes that wine critic Robert Parker even picked Storybook Mountain as one of the six best zinfandels in the world.

VinRoc: The Atlas Peak district winery in Napa and proprietor and winemaker Michael Parmenter’s home were destroyed. “Total loss, everything was gone except our (wine) cave,” he said. The boutique winery takes its name from the rock-lined mountain vineyards and produces cabernet sauvignon, a red blend, and Chardonnay. The wine cave is a highlight feature of the winery.

White Rock Vineyards:  — The winery had confirmed significant damage, but the family posted on its website that the winery and most of the wine were protected in an underground facility and cave system and the vineyards survived the fire. A San Francisco Chronicle photo showed damage to the wooden cave doors and some bottles of wine.